LIVING WITH THE LOSS OF A LOVED ONE 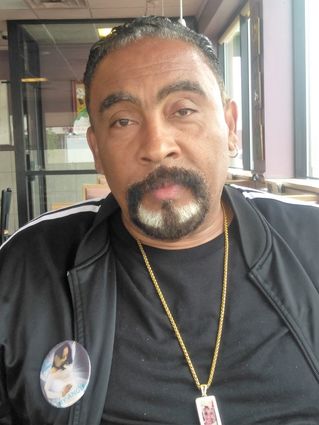 Kenneth Holloway wears a button with his daughter's photo

It was a rainy day in Detroit when I went to meet Kenneth Holloway, better known as the Candle man, at an eastside restaurant.

I've known Candle man for about ten years. We met when we were involved in activities protesting the second Detroit-Canada bridge. We traveled to Lansing together and testified before the state legislature.

I'd lost contact with him and only recently learned that his only daughter, Ashley Holloway, had been murdered by a man brandishing a hand gun in 2016.

I retrieved his number from a mutual friend, called him up to express my sorrow and condolences, then we arranged the meeting at the eatery.

The rain fell at a steady pace. Not too hard, just relentless in its downpour. Like the tears of the countless loved ones of those who had been murdered. Of those that had the most precious gift of all snatched from them, not because they were bad people. Nor, even, that the killers themselves were necessarily evil or malicious people. It was just that the wrong circumstances, under the right stress factors, along with warped mentalities with spiritual deficiencies had led to a terrible decision made in a micro-second, and a priceless human life had been snuffed out.

Candle man and I sit near the window overlooking the parking lot. Despite the obvious pain and trauma that he was going through since his daughter's death, he looked well. I notice that he has a large button with his daughter's likeness pinned on his chest near his heart. And a medallion with her picture that he's wearing around his neck.

We exchanged small talk for a few minutes then he paused, shifted mental gears and began to share the circumstances of his daughter Ashley's death. "She got shot on the west side of Detroit. It was around the corner from where she lived. Over at Joy Road and Patton. Ashley was taking a friend to the store around 9 in the evening. She backed into the parking space. My daughter never got out of the car. It was her friend who went in. When he came out, they began to pull out, and Ashley slammed on the brakes, so she wouldn't hit the car that was passing by. There were three people in the other car, two women and a man. The woman in the back seat called my daughter a 'B'. Then she jumped out the car and acted like she wanted to fight. Ashley was driving off and that's when the man who was driving the car with the women shot my daughter in the back of the head. And when they were driving off, one of the women asked him why he shot her. He said that he had a lot of anger on his mind."

There were 302 homicides in Detroit in 2016 out of a population of 677,117. And according to police chief James Craig, 114 of the 302 killings were the result of arguments. Yet, these statistics mean little to Candle man. For his daughter did not argue with her murderer. And he may never really understand why a drive to the store ended with her being taken from him. Why it was his daughter who was the victim of most unpredictable and in cipherable of human emotions; the ignition of anger in the human psyche that leads to violence.

Holloway is a strong man. One would have to be to live in a city like Detroit for 60 years. A city that crushes or grinds away weak and timid vessels. But he is still staggering two years later under the crippling weight of losing his daughter, losing her to the savagery that crouches anonymously beneath the surface of every human heart.

The man who shot and killed Ashley Holloway is Elzra Johnson. He was convicted on charges of second degree murder, assault with intent to murder, and possession of a firearm by a felon. He was sentenced last May to 80 years in prison.

"I just can't forgive him, Candle man said. "Because he killed my daughter; he murdered her for something stupid."

The rain outside has stopped, but the gray and somber mood it ushered in still clings to our surroundings. And I can sense the anguish and the resentment, still smoldering in Candle man's eyes. "You have not really lost her," I offer as some form of comfort. "She will always be there with you in the golden memories you have of her." Candle man graciously nods his head in agreement. Yet I know that what I'm giving him is not enough. It is like tossing straws to a drowning man who is thrashing in the sea.

We have eaten our meals, and we've talked about the unimaginable horror of the loss of a child; his beautiful woman/ child cut down before she really had the chance to prosper or to bloom. We walk outside, back out into the cold, unpredictable and sometimes vicious and unforgiving streets. I tell Candle man that if he ever needs someone to talk to, don't hesitate to call. He assures me that he will, and on that somewhat positive note we part and merge with the city. Each of us following the dark, mysterious shadows of his own destiny.