Spike Lee Assumes His Role as an Iconic Filmmaker with His Latest Production: 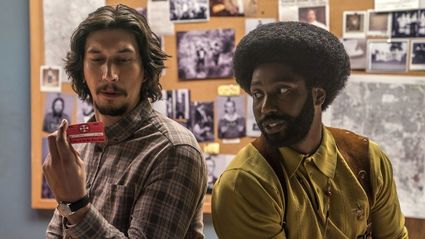 You just can't make this stuff up! A Black detective infiltrates the White racist Ku Klux Klan. When? Where? Why? How? If you want to know the details and want to be entertained while you catch up on this bit of Americana history, just set aside 2 hours and 14 minutes and watch this screen adaptation of the memoir "Black Klansman." It's a very true and eclectic story about a brave man and a very gullible bunch of bigots.

Shortly thereafter, he got the idea to join the local KKK, who was revving up a membership drive and sanitizing their hatred by calling themselves "The Organization." By phone, Ron joined the group to investigate their activities and thwart any violence. Talking to them over AT&T was one thing, however seeing them in person, was going to be another.

As the story unfolds on screen-directed by Spike Lee, from a script by Charlie Wachtel, David Rabinowitz, Kevin Willmott and Lee-Ron (John David Washington) has come up with a brilliant idea for faking out the KKK in person.

He will send a fellow White police officer, Flip Zimmerman (Adam Driver) to do the face-to-face meetings. Flip will be the White Ron Stallworth, but he is reluctant, so Ron applies peer pressure.

"You're Jewish! Why you acting like you don't have skin in the game." Flip takes the bait and goes along with the masquerade.

And so, the subterfuge begins, the charade gets more devious and success follows to the point of the Black Ron Stallworth, getting assigned as a security guard for KKK head David Duke (Topher Grace). In real life, Duke must rue the day he was outsmarted and duped-by a brother man!

While the satiric shenanigans are on parade, the musical soundtrack (Terence Blanchard) is blaring '70s soul music. The editing (Barry Alexander Brown, Do the Right Thing) is keeping a beat and the characters are jetting around in fly period costumes (Marci Rodgers) with the characters sporting afros the size of basketballs.

In addition, the visuals (Chayse Irvin, cinematography) brim with colors and doodads (Marci Mudd, art direction; Curt Beech, production design) that recreate a time in America when standing up to the man was the thing to do. Many things can be said about Spike Lee's direction, but subtlety is not one of them. The gutsiness and insanityof the situation is in every scene.

Stallworth's crazy quest is hyped and manic. The hysteria, satire and absurdity are in your face, which is juxtaposed against a serious storyline where a cop is risking his life and in danger. The comic approach to the historical feat may be courtesy of producer Jordan Peele (Get Out).

Certainly, watching racism full on is made a bit more palatable with the doses of humor. On the other hand, at times, the humor seems to undermine Stallworth's courageous mission and the dialogue's constant barrage of repulsive, racial slurs, may give some audience members pause.

John David Washington brings a lot of verve to the Stallworth character. What's missing is an obvious range of emotions that should run from anger, to fear, to sadness, to elation. Hard to image the real Stallworth was so giddy as he was putting his life on the line and dealing with murderous psychopaths.

Laura Harrier as Patrice Duke, who runs the Black student group that brings Kwame Ture to town, is the perfect counterbalance. Her Duke is sublime, intelligent and politically savvy. Her performance brings a sensitivity out of Washington that is needed. Driver is fine as the reluctant doppelgänger.

Corey Hawkins (Straight Outta Compton) as Ture, brings the juice in his flaming speeches. A cameo by Harry Belafonte adds an unexpected state of grace.

There are moments when David Duke talks to his constituents about making "America First." At these points it is very obvious to anyone who has kept up with the news in the last two years that this dog whistle language parallels Donald Trump's spiel. At the end of the film, during a montage of current civil rights moments (e.g., the killing at Charlottesville) there are images of Trump at a podium in front of his followers bellowing "Make America Great Again." These last minutes of news clips would have been stronger if they were shorter.

No need to hit the audience over the head with the film's most obvious message: the '70s made Americans fight against racism, things haven't changed much, look where we're at now and what are you going to do about it? The film's masterful storytelling did its job. The message was clear. No need to overdo.

BlacKkKlansman is surreal and stranger than fiction. It is also an audacious racial, social and political statement.