Treating Students as if They are Criminals in America's Schools 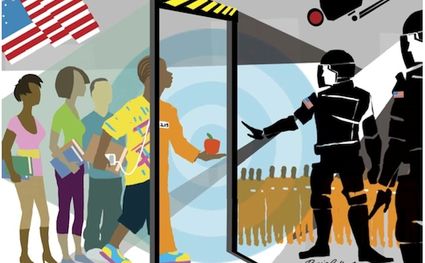 Several years ago, police raided a Detroit high school. 49 students were arrested for loitering and detained at the police station. And in an incident that made international news, a Black five-year-old girl in Florida was handcuffed by police in her kindergarten class, placed in the back of a squad car and driven to the station because she reportedly had a temper tantrum.

In Detroit, as well as in many urban centers across America, the sight of police, guards, metal detectors, surveillance cameras, and bolted doors in public schools have become normal. Yet these drastic security measures have not been favorable in creating a successful learning environment. It has only bolstered the mentality that feeds the school-to-prison pipeline that, sadly, is so much a part of the nation's education system.

Federal data shows that children from Black and Brown families are far more likely to be singled out for arrest and to be jettisoned into the court system where they are saddled with police records and convictions that impede them from attaining employment, good credit ratings, and opportunities for higher education in acclaimed colleges and universities.

According to data compiled by the Center for Public Integrity, Michigan has one of the worst rankings for the number of students (from the first grade thru the twelfth) referred to the so-called criminal justice system annually. Out of fifty states, Michigan was number ten.

"Today there is a police presence in almost half of all public elementary schools, especially those serving poor African American and Latino communities," writes professor Peter Edleman. "And probably none in private schools except for the Secret Service. Ironically, the tragedy of White boys murdering White students morphed into the school-to-prison pipeline for poor African American and Latino youth and youth with disabilities."

The U.S. Department of Education Office of Civil Rights reported that in the 2011-12 school year 92,000 of the nation's students were the subjects of school related arrests and over 260,000 were referred to law enforcement agencies.

Of course, with increased police presence in schools, there is bound to be increased arrests of students especially when police are not properly trained that their duty is to help and to protect students and not to perceive and treat them like criminals or potential criminals.

"Black boys are viewed as more threatening pretty much from the time we start walking," writes Paul Butler, a former prosecutor. "About half the children suspended from preschool are Black, even though they are only about 18 percent of kids enrolled in preschool. We're talking about four-year olds. Sixteen percent of Black kids are suspended from school every year. In a situation in which a teacher sends a White boy to the principal's office, she calls the cops on an African American boy. In fact, 70 percent of school discipline cases referred to the police are African American or Latino kids."

In Detroit, public schools are hindered because they are drastically underfunded because of a shrinking tax base caused by the highest poverty rate of any large city in America. And this is further aggravated by a staggering home foreclosure rate as well as searing neglect from local, state and federal government entities.

If that isn't enough, many young Black students come from single parent homes where there are scant resources and limited time devoted to helping with homework and other academic pursuits.

Moreover, in today's electronic age, there are innumerable distractions in the form of games, cable television shows, "smart phones" and the internet and most of it is antithetical to academic achievement or educational empowerment.

These factors often result in children losing interest in school, spending excess time in game rooms and on the streets and eventually into contact with law enforcement officers that have been conditioned to view them as wild, dangerous, and threatening.

Many Black students lose interest in school and eventually drop-out because of poor reading skills as well as biased academic literary testing. Professor Veda Jairrels, an expert on how standardized school testing impacts African American children, believes that literacy levels of African American children should not be viewed in a vacuum but within the historical context of social habits that have been passed down for generations and aggravated by economic and racial injustices. And as a result, many African Americans grew up without access to quality schools, books, or libraries resulting in Black parents being less prepared to assist their children with their education and reading far less to their children than they should have. "There are three main things that I want parents to do," said Jairrels. "Number one, I want them to start reading to their children everyday beginning at birth. Number two, it is important to that infants and toddlers hear 30,000 words per day between birth and age three. And I want children to read at least 30 minutes a day, every day. The point that I'm trying to get across to Black parents is that the reading that is done in school is not enough."

Another factor that may facilitate disinterest in school by Black students is a severe lack of Black teachers and educators. Black teachers comprise only about 7 percent of public school teacher across America, and Black men make up only 2 percent of the total.

A revealing study from the Institute of Labor Economics indicates that young Black students that have at least one Black teacher in elementary classes are almost 40 percent less likely to become drop outs. They are also 29 percent more likely to go to college. In general, students tend to relate better to teachers that share similar cultural and historical backgrounds. And teachers tend to be more empathetic with students with whom they share similar backgrounds and identities.