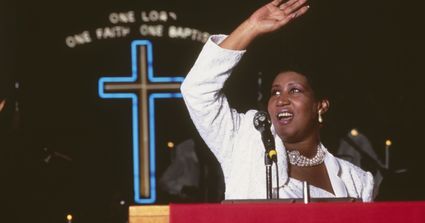 Washington DC – The National Black Church Initiative (NBCI) a faith-based coalition of 34,000 churches comprised of 15 denominations and 15.7 million African Americans, is saddened to hear of the passing of our Sister, Aretha Franklin, who is the Queen of Soul. When the Black community gave Aretha that title, Aretha dominated the charts in every respect. She sang not only rhythm and blues, but blues, jazz, and all African American music styles.

She was a versatile soul of music.

Rev. Anthony Evans, President of the National Black Church Initiative says, "When a star dies of this magnitude, who did not have any relationship with the Lord Jesus Christ, the sermon delivered would be unnoticeable, unnotable and void of any God language to connect that particular star to God. The preacher would be searching for words to comfort the family. Praise be to God that this will not be the case of the lifetime and the spirit of Aretha Franklin. Not only did she know the Lord she loved the Lord. And not only did she love the Lord she sung the Lord's songs. Whoever preaches at this funeral will have so much material to pull from that it will be overwhelming for one soul to come up with a simple Word that the world needs to hear about the soul of the Queen of Soul."

She also was a preacher's child of the likes of Rev. C.L Franklin who was one of Martin Luther King's closest confidants. Martin King, when visiting Rev. Franklin's Church would especially ask, if Aretha could sing just before he preached. Aretha loved Martin. When Martin died, everybody in the Black community knew that Aretha would represent us by singing Martin's favorite song Precious Lord. For many whites, this was the first time they had heard that golden voice that God gave her. A voice that we may never hear again.

One will never forget that beautiful African chocolate face with that afro and that voice, sailing through the air of the destinies of Black folks in this country.

She represents every major milestone in African American history and culture. Born in Memphis but raised in Detroit, and there in Detroit everybody knew her and loved her equally. She demanded respect for herself, her family, her Church and all Black people.

Her voice struck an emotional chord within Black America that no other singer since has done. The closest of anybody coming to Aretha was Whitney Houston. And, as quiet as it is kept, Aretha is Whitney's cousin. They knew each other, and they loved each other.

Aretha Franklin will be noted for many things because of her voice, her talent, her father Rev. Franklin, and many other milestones in her life. One of the milestones that we may never get over and may never be duplicated again is her album Amazing Grace. This album is undoubtedly the number one Gospel album ever. For anyone who is sad, near suicide or lack any hope, once they hear Aretha Franklin sing Precious Lord, Mary Don't you Weep, What a Friend we have in Jesus, Amazing Grave, and others would be able to overcome any grief that they have in their lives at that moment. The Black Church declares this album, an album from the revelation of God's lips to His people for the hope, for the love, for the inspiration and for saving grace.

The National Black Church Initiative (NBCI) is a coalition of 34,000 African American and Latino Churches working to eradicate racial disparities in healthcare, technology, education, housing, and the environment. NBCI's mission is to provide critical wellness information to all of its members, congregants, Churches and the public.