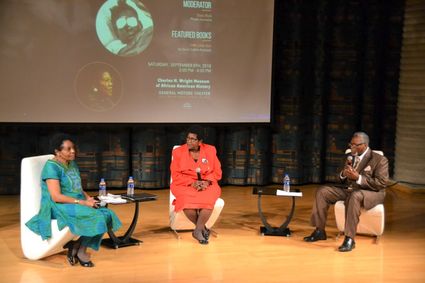 DETROIT, MI- The Charles H. Wright Museum of African American History marked the 55th anniversary of the horrific church bombing that claimed the lives of four little African American girls and energized the civil rights movement, on September 8th. Dale Rich realized that many people didn't know that there were five young girls that fell victim to the blast. The surviving young girl was Sarah Collins Rudolph. It is widely thought that the church bombing was a retaliation for the Birmingham Children's March, which took place five months earlier. Sarah Collins Rudolph was scheduled to be in attendance, but was to ill to make the event.

Featured during the event was Detroit resident Mamie King-Chalmers, a Birmingham native and veteran of the historic Children's March of 1963 in which thousands of youths were willingly arrested in order to force Birmingham, at the time America's most virulently racist city.. During the program Mamie shared her experiences as a young lady and how she was determined to participate in the March at whatever cost. King-Chalmers had recruited people in her neighborhood to participate in the Children's March and consequently was targeted by police for her leadership, determination and courage. In addition to being hosed, she spent five days in jail under horrible conditions, and was chased by dogs and beaten. 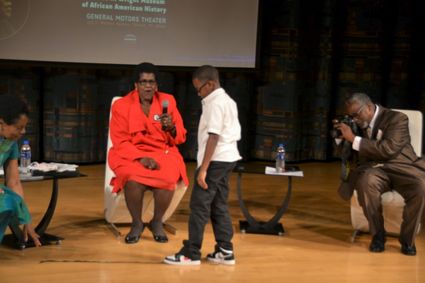 A slideshow titled "The Struggle Continues" was presented by Dale Rich, noted genealogist, photojournalist and black military researcher. The attendees also had the pleasure of hearing nine-year-old Alison Felder recite Martin Luther King's speech, "How Long, Not Long," and "A Birmingham Ballad" by Dudley Randall.

Before the discussion, the attendees watched the video of the Children's March in Birmingham 1963 to set the stage for the discussion. Thousands of children participated in weeks of peaceful protest however they were put in jail, spayed with water hoses and bit by dogs. In the end, President Johnson signed the Civil Rights Acts of 1964 and segregation was no more.