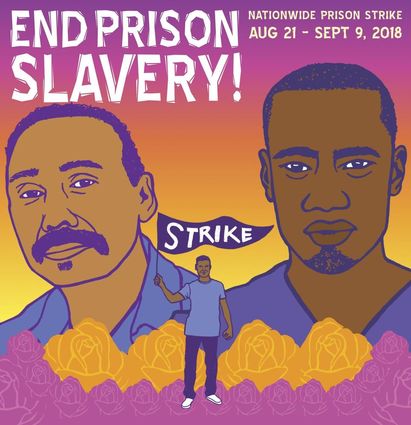 A prisoner strike began on August 21 to commemorate the legendary prisoner and Black Panther Party leader George L. Jackson who was killed by prison guards on that date in 1971, and is scheduled to last until September 9, which is the date of the historic Attica prison rebellion of the same year.

Prisoners in several states across America as well as in Canada are refusing to work, boycotting prison commissaries, participating in hunger strikes and sit-ins to bring attention to the inhumane conditions that they are forced to live in.

According to most experts, conditions in America's prisons are atrocious. Inmates suffer mental torture such as severe isolation for long and sometimes indefinite periods. And there is physical and psychological abuse from guards and administrative staff. Inmates are also subjected to slavery conditions, for the 13th Amendment of the Constitution permits it for those that are convicted of crimes.

The prisoner protest was jump-started by inmate deaths at the Lee Correctional Center in South Carolina, were seven prisoners were stabbed to death on April 15, and 22 were injured in what was described as the bloodiest prison incident in a quarter century.

The killings were reportedly instigated by an insidious practice that guards use of pitting hostile gangs against each other, then turning a blind eye to the mayhem that results from it. Guards have also been known to use gang members as enforcers against other inmates and as collaborators in illegal money-making schemes. According to insiders, it's a practice that occurs with vicious regularity throughout the nation's prison and jail systems.

Prisoner representatives issued a list of ten demands that include:

• An immediate end to prison slavery.

• An immediate improvement of conditions and the implementation of policies that recognize the humanity of men and women.

• An end to racial overcharging, over sentencing and parole deniers of Black and Brown humans. In addition, Black humans no longer being denied parole because the victim was White.

"We want an end to the physical place we call prisons and the conditions that make it possible in our society," said Dr. Kim Wilson, a prison abolitionist. "But we can't do that without addressing the underlying issues of racism, anti-blackness, ableism, capitalism, gender violence and other issues deeply implicated in the broader prison system. We must take seriously what the prisoners are saying."

In response to a peaceful protest, prison administrators sent in armed guards and attack dogs to round up those they suspected were the leaders. Outraged prisoners destroyed close to a million dollars in prison property and it took intense effort by guards and staff to regain control of the institution.

"It's a very scary thing to see hundreds of prisoners moving as one body," said Michigan Department of Corrections spokesman Chris Gautz. "When you are in a prison setting, you are greatly outnumbered."

The United States has the largest prison and jail population in the world with close to two and a half million people locked away, which is a ratio of 1 in every 110 Americans incarcerated.

Many conservative pundits say that these figures simply indicate that Blacks and Latinos are involved in more criminal activity than Whites, and they deny that racist policies and practices have anything significant to do with it. However, American history and factual evidence tells a different story.

From the slave patrols in chattel slavery, to the infamous Black Codes implemented after the Civil War, and the stop-and-frisk practices of law enforcement agencies throughout the nation, it is an American tradition to target Blacks for arrest, detention and punishment. Most White citizens know that if they call the police and report a "suspicious" Black person, the police will promptly arrive usually with guns drawn and ready. In fact, throughout most of the nation's history it was standard practice for Whites to commit offences and accuse Blacks of committing them, knowing that the police are conditioned to see Blacks as criminals and will easily take the bait.

Police, in collaboration with the judicial system, also focus on Blacks and Latinos because they are considered bereft of political and economic power or influence and, thus, easy and vulnerable targets. Yet the underlying motive for it all is control. The Black and dark hordes of humanity must be controlled and contained using all methods, fair or foul.

"What cannot be understood is the fact that this is created and driven by racism," said Dr. Heather Thompson, a professor of history at the University of Michigan. "Seven point five million Americans are in the system. Most would not be here if they were the children of White Lawyers, doctors and politicians."

The American prison population, although declining slightly over the last two decades, is still overburdened with human beings that are being warehoused like livestock. The record shows that prisons have failed miserably in rehabilitating inmates, while the well-to-do that commit crimes using computer key boards, insider knowledge and political connections (crimes that often have more lasting and harmful consequences on the nation than street crimes) go largely unindicted and unpunished.

"What we're dealing with consistently is prisoncrats refusing to accept responsibility and accountability," said a prison inmate and member of Jailhouse Lawyers Speak (JLS). "Because they created these conditions, these are the results. But you can't snuff out a human's life without killing them. There's going to be resistance."