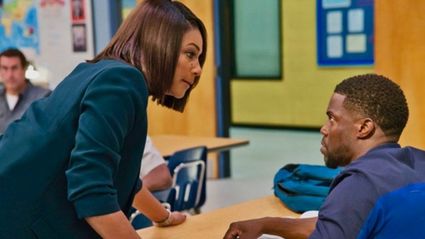 It's a match made in heaven - well maybe Atlanta - that's where this film was shot. Kevin Hart, the rich, diminutive comic strongman shares the silver screen with the breakout star, and his former protégé, the very cray cray Tiffany Haddish. There's a great potential for outrageous, side-splitting humor and for the most part the duo lives up to that billing.

Expectations are also high because director Malcolm D. Lee is at the helm, fresh off his gigantic success with Girls Trip. The whacky script is the creation of five writers: Hart, Harry Ratchford (Kevin Hart: What Now?), Joey Wells (Kevin Hart: What Now?), Matthew Kellard (Real Husbands of Hollywood), Nicholas Stoller (The Carmichael Show) and John Hamburg (Zoolander). Hart and his crew establish a funny set of characters who act out like bad kids in study hall, only they're adults working on their GED. Seemingly losers in life in need of a break.

Teddy (Hart) works at BBQ City selling ribs to happy customers. He's dating Lisa (Megalyn Echikunwoke, TV's Vixen), a professional who makes more money in a day than he makes in a month. She's way out of his league, but he's playing the charade of a rich boyfriend, with a Porsche convertible, fancy clothes and such. Teddy, a high school dropout, who thought he could hustle his way through a career, wants to get ahead in the world, but he's limited by his pay grade and the lack of an education.

When he loses his job, his buddy Marv (Ben Schwartz, TV's Parks and Recreation) wants to get the peppy salesman a position at his financial firm, but Teddy will need at least a GED to get started. Reluctantly Teddy heads back to Piedmont High School, his alma mater, to check out how he can get his certificate. He is mocked by the snotty high school principal Stewart (Taran Killam, Saturday Night Live), who has been jealous of Teddy going back to their days at that high school. The night school teacher Carrie (Haddish) and her new con artist student don't hit if off at first. She doubts his dedication, and he thinks he is better than the other misfits in his night class. But sooner than later, Teddy realizes the importance of an education: "Night school is about second chances. Night school is all I have," he says.

Truthfully, this comedy of physical pranks, bitch sessions, put-downs and social class jokes has its peaks and valleys. But the peaks are so high, thanks to the cast and dialogue, that the valleys are unnoticeable. There's the romantic angle as Teddy courts Lisa and learns that the truth is better than deception. There's the mentor/protégé relationship he has with his teacher, who is not above taking off her belt and beating his ass when he becomes hardheaded.

The comradery that grows between the values-challenged adult student and his equally lost classmates grows increasingly endearing: There's Jaylen (Romany Malco, Think Like a Man), a brother whose job got replaced by a robot; the meek demented mom, Mary (Mary Lynn Rajskub, TV's 24), who uses the class as a refuge from her family; the pouty millennial, Mila (Anne Winters, Sand Castles); the dumb ex-jock dad, Mackenzie (Rob Riggle, Modern Family); Luis (Al Madrigal, TV's The Daily Show) an adult who wishes he was a teen pop star like Justin Bieber; and Bobby (Joseph "Fat Joe " Cartegna), a convict who's being skyped in from his prison's multi-purpose room.

The physical comedy hits a high point in a scene in a martial arts studio where Carrie gets in a boxing ring with Teddy to beat the dumbness out of him. She asks him GED exam questions, and if he gets the answer wrong, she slugs, kicks or throws him while screaming "Focus!" Not many comics can pull off this kind of unrepentant, humorous violence and make the audience believe it and laugh hysterically. She can. Haddish, as an African American comic actress in high demand, is blazing a trail all her own.

Haddish's perfect companion is the very disarming Kevin Hart. His self-deprecating humor is infectious: "Learning disabilities? Oh my God I have learning herpes!" His smile could charm the wallet out of your pants and you wouldn't notice. He wears hubris well, takes his lumps like a champ and he learns life lessons that sometimes make his comedies more than just a laugh. It's no wonder the dude is worth millions and has millions of social media followers.

The supporting cast shines like jewels in a necklace around the main two diamonds. The chief scene stealer is Taran Killam, whose interpretation of Stewart, who has a penchant for using black inner-city slang, then denying he did it, is as funny as he was on SNL. Veteran actor Keith David (Platoon, Bird, First Sunday) as Teddy's dad mocks his son unmercifully for being an idiot, while his twin sister (Bresha Webb) is a scholar. Mary Lynn Rajskub deadpans jokes about sex and family that you just don't expect to come out of her mouth.

Malcom D. Lee keeps the proceedings going. With the help of editor Paul Millspaugh (Girls Trip) he gives the 1hr 51 min film a nice pace and rhythm that holds your attention throughout. The high school prom dance scene, a school break-in, and the aforementioned martial arts sequence shows off his keen ability to add action to comedies and help them stay afloat. If there is a flaw in the film's production, it's that a number of scenes look like TV sitcom sets, and when those moments come along, they don't have much movement and you notice the harsh lighting (Greg Gardiner, Barbershop: The Next Cut) and the generic musical score (David Newman, Girls Trip) that would be more appropriate as Muzak in your local Sears.

Once upon a time in the movies, there was Dean Martin and Jerry Lewis. Then Richard Pryor and Gene Wilder. Jack Lemmon and Walter Matthau. We can hopefully add Hart and Haddish to a long list of comedy icons who paired up and were even better as a team than apart. Comic matches made in heaven don't come along that often. This one is quite precious. It's golden.