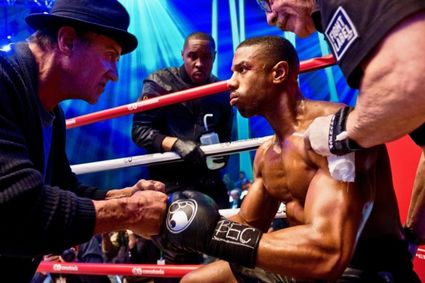 This follow up to the very popular boxing film Creed (worldwide gross $174M) throws a lot of left hooks, right jabs and uppercuts, but only a few connect and none land a knockout punch. Count on the mass appeal (young, old, urban, male and female) of Creed II to put viewers in seats this holiday season. But, will they enjoy what they see? Yes, somewhat, if patience is one of their virtues.

There's a key difference between the first and the second chapters in this franchise. The exceptional director/writer Ryan Coogler (Fruitvale Station, Black Panther) left his imprint all over the first one: heavy emphasis on relationships, emotions, performances, pacing, style. The second one is directed by Steven Caple Jr., whose resume is filled with short film and TV credits. His interpretation of Cheo Hodari Coker's (TV's Southland and Luke Cage) script has a similar feel, but not as organic or fresh.

Adonis Johnson (Michael B. Jordan) has finally become the Heavyweight Champion of the World. He's got his significant other Bianca (Tessa Thompson), the singer/songwriter, by his side. The mentorship he received from his coach Rocky (Sylvester Stallone) is tight. Life is good on the outside, but something eats at him from within. It's an insecurity that flares when a skeezy boxing promotor, Buddy Marcelle (Russell Hornsby, Fences), tempts Adonis into a fight with Viktor Drago (Florian Munteanu, a German-Romanian boxer/actor), the son of boxer Ivan Drago (Dolph Lundgren, Rocky IV), the man who beat Adonis' dad Apollo Creed to death.

The taunting that ensues gets into Adonis' head, stirring up old thoughts he hoped he was over. With the press, Marcelle and the Dragos baiting him, the young boxer has some far-reaching choices to make that could make or break his career and test his bond with family and friends.

Audiences will wish that this fight film started with an explosion. It doesn't. The footage rolls, the plot is disseminated and the mundane, everyday drama on view goes on for way too long. For a boxing movie, a lack of action is the kiss of death, and little of note arises until Act III.

The languid pacing (editors: Dana E. Glauberman, Saira Haider and Paul Harb) will leave audiences tapping their toes collectively and waiting for an adrenaline injection. The boxing choreography is unoriginal-never electric. The Rocky-themed music blares loudly to no avail. The visuals (cinematographer Kramer Morgenthau, Game of Thrones) lack the splendor DP Maryse Alberti (The Wrestler) brought to Creed. The exception would be a dazzling entry in to the final brawl, when a stunning lighting effect forms a triangle and the Creed team enters.

Cocker's script is competent and respectful of all the characters, some of which have been around for over 40 years. That said, nothing in his screenplay takes the individuals' storylines to a new place that's worth a trip. Adonis and Bianca's partnership evolves. The Dragos' father/son dynamics is of mild interest. Adonis' conflicts with Rocky cause a bit of a stir. But none of it will make you cry, impose fear or instill anger. Of course, Rocky still has his words of wisdom, "If you want to give pain, you have to take pain." But nothing he says is truly profound. The best dialogue is reserved for the repartee between apprentice and crusty coach as they casually joke with each other like old friends.

If this sequel has a savior, it's the superb acting, which is so good it should be captured and taught in acting classes. Almost single-handedly, Michael B. Jordan takes this film the distance. In gestures, attitude and a wide range of expressions, he makes Adonis far more complex than the film itself. His performance never blinks, even when the film flounders. He is always on the beat, firm, determined and authentic to the character.

Jordan's unflinching portrayal rubs off on every actor he encounters. Scenes with Tessa Thompson and Phylicia Rashad, who plays his adoptive mom Mary Anne Creed, feel intimate and warmly familial. Stallone stumbles around the sets like an aged punch-drunk boxer. He's convincing throughout, and his acting goes up a notch in his sequences with Jordan.

Director Steven Caple Jr. doesn't do anything wrong. Most of what's on view, from the drama to the fights, is competent. It's just not magical. That's the intangible force that Ryan Coogler brings to every film he makes. Once you leave the theater after a Coogler movie, you feel touched by his genius, drawn into his values, artistry and dedication. After a Coogler movie you want to know what happened to the characters. You want more. The direction, script and technical credits for this follow-up do not have that staying power.

Considering the history and popularity of the first Creed, which was also released around Thanksgiving, its successor should pull in a sizable crowd. After viewers see it, will they want more? We shall see.