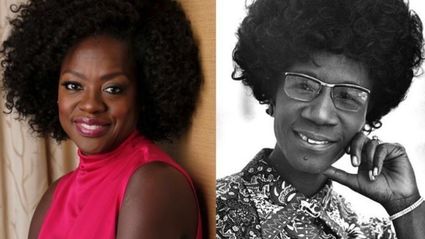 Oscar-winning actress Viola Davis will portray legendary politician Shirley Chisholm in a feature film for Amazon Studios. Chisholm was the first African American woman in U.S. history to be elected to Congress.

The announcement regarding the film landed on the same day as news of a Shirley Chisholm statue in New York City's Prospect Park was announced by New York's first lady Chirlane McCray on the last day of November. November 30 would have been Chisholm's 94th birthday.

The film project is currently entitled "The Fighting Shirley Chisholm." According to Deadline Hollywood, "Davis will produce and star as the U.S. Representative."

Amazon Studios won a bidding war for the rights to produce the Shirley Chisholm film. The project is the first Amazon Studios production deal emerging from the partnership between Viola Davis and Julius Tennon's JuVee Productions and Amazon.

Maggie Betts will direct the movie. Her feature film "Novitiate" was nominated for the Grand Jury Prize at the Sundance Film Festival in 2017.

Chisholm represented parts of Brooklyn which made up what was then the 12th congressional district in the U.S. House of Representatives from 1969 to 1983. In a historic move, Chisholm ran for president in 1972. She was the first African American to mount a major party run for President as well as the first African American woman to run. Chisholm passed away in 2005 in Florida at the age 80.

Viola Davis won an Oscar in 2017 for supporting actress in her role with Denzel Washington in the film version of August Wilson's play "Fences." Davis also won a Golden Globe and SAG award for the performance.

Betts, who will direct the Chisholm biopic, is represented by Homegrown entertainment which is focused on "creating content by and about women and people of color with authentic stories, depictions and representation."

Lauren Victoria Burke is an independent journalist and writer for NNPA as well as a political analyst and communications strategist. She may be contacted at [email protected] and on twitter at @LVBurke