In the Battle for Peace, Ecorse High School Wins the Latest Round 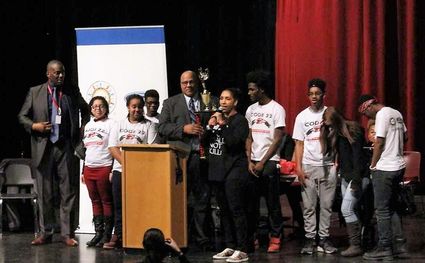 The battle for peace is continuing in two downriver school districts. Since October 22, 2108, Ecorse High School in the Ecorse Community School District and Robichaud High School in the Westwood Community School District have been locked in competition to determine which student body can be more proactive in promoting peace and devaluing violence and negativity. The competition is called Students for Peace.

The competition is the creation of Rev. Ovella Davis, President and Founder of United Communities of America (UCOA). The competition between schools is a friendly one, and puts the focus on the region's youth and the impact violence and bullying has on them. In November, Robichaud High School was the victor, earning a pizza party, prizes, courtesy of community partners such as Ford UAW-- and the right to display the victor's trophy. This past February 7, the victory celebration was held at Ecorse High School.

Davis came up with Code 22 as a tool for promoting peace within the community. The code calls for the 22nd day of each month to be a day of peace, when individuals promote peace, healing, and positive attitudes. Students use the code as a pledge that they will try in their own lives to promote peace and walk away from conflict. While the 22nd day each month is designated, students try each day to be agreeable and not to let tempers flare. In the competition, students receive points for promoting peaceful choices and lose points for promoting fights or negative behaviors. The points are tallied each month and the winning school gets the trophy.

At Ecorse High School, the students were addressed by Ecorse Mayor Lamar Tidwell. "In life, you go through ups and downs. But you all got to understand, fighting is a down; education is an up," Tidwell continued. "If you spend your time educating yourself, you'll have less fighting. If you spend your time studying, you'll have less fighting." Tidwell encouraged the students to look ahead to adulthood and find the potential within themselves which can make their lives meaningful one day.

Also addressing the students was Ecorse High Principal Kenneth McPhaul, who congratulated the students on their victory. "Ninety-five percent of you guys want what is best," he said. "What we're trying to do is give you a future, the future in which you can take care of yourself." McPhaul also addressed an incident at the school in December during a basketball game in which a melee involving students and adults broke out. The incident validated the need for a youth violence prevention program in the district. He emphasized, "Everyday should be a day of non-violence."

Community partners are stepping up to aid the students in their quest for peace, as well. DeShawn Reed, owner of D's 24 Hour Coney Island in southwest Detroit attended the celebration. An alumnus of Ecorse High School, Reed encouraged the students to make the image of their school a positive one. "Let's all come together, man, and make Ecorse High the best school in Michigan!" Reed told the crowd of cheering students. Reed also provided the students coupons for a free coney dog from his restaurant. Reed says that when Davis approached him about the Students for Peace Program, he researched it and was impressed with the good her organization, UCOA is doing in local communities, especially with youth. He says it is necessary for the community to get involved with young people. "It's time for us to step up and come together collectively and try to stop the violence and try to get these kids on the right path, because if we don't, it's gonna get worse." 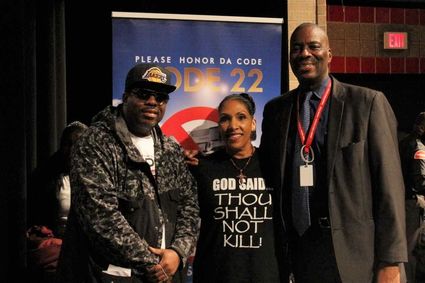 For more information on Students for Peace or the United Communities of America, see the organization's website at http://www.ucoa.org.