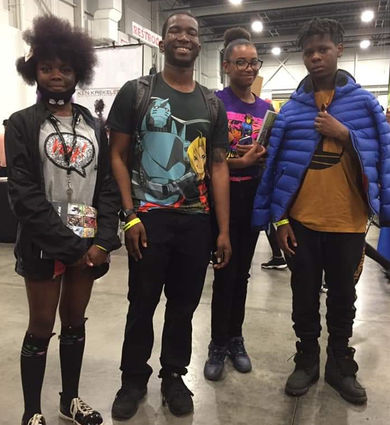 To the pop culture fans of Metro Detroit, an event bigger than the super bowl, or NBA Finals has made an appearance in Novi. 2019 Motor City Comic Con expected to rise to the grandiose shenanigans of the prior twenty nine years. Fans, artist, cosplayers, readers, writers, anybody who survived Thanos's snap poured out to the Suburban Collection Showcase.

This is the 30th year the MCCC has been in our region. When the Motor City Comic Con took off, it was being held at the Dearborn Civic Center. It has been in Novi since 1994. Each year the show gets bigger, and gains a new layer of support within the community. The three day event was funded by Michael Goldman in 1989.

Powerhouse comic distributors like Marvel and DC take up most of the spotlight. Comic book shops, and collectable stores travel from far across the country to show off their goods, and to earn bragging rights on who had the better collection. Crafting merchants, jewelry and clothes makers were also available to make a Motor City Comic Con first impression. Although the theme is normally comics. Anime, cinema, cartoon, and random pop culture meshed in well with it all.

Representation matters. It is one of the reasons comic books reign supreme. Comic books have given characters of all spectrums a voice. Sometimes, representation isn't enough. It's laced with stereotypes and doesn't carry over well.

Miss. Maia Williams, founder of Amonyet Enterprises and MECCA (Midwest Ethnic Convention for Comics and Arts) is disgusted with the ill way people of color are portrayed in comics. So she did what any strong black woman would do.

She pulled the resources to get the job done herself. Miss. Williams compiled handfuls of talented writers, artist and creators to show her presence at MCCC. Maia Williams's squad of art muscle lifted her up as she held them down. Three straight days of grinding, networking, and panel discussions. MECCA took up so much space the artist area got its own name. "C Block". Which was almost a city block of black independent comics that tear away from the mainstream troupes.

This is not the first event for Maia Williams and Amonyet Enterprises. MECCA is having its own convention and international film festival September 19th-21st .

Don't be upset if you missed the Motor City Comic Con. There are other conventions to indulge in this summer. The Michigan Comic Con will be at Cobo Hall August 16th-18th. The Downriver Comic and Collectors Show will take place at Lincoln Park High School on June 1st & 2nd

Thank you Motor City Comic Con for coming out and giving us the chance to meet the little kid inside of us.