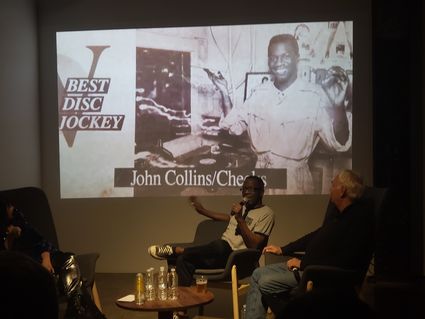 John Collins tells his story while a younger rendition of himself charms the audience.

Detroit has a reputation for talent and history. Detroit's culture of art, style and music will all always thrive. But voices outside the arts have shifted the narrative. Chunks of the lineage has been forgotten, and unappreciated. The Red Bull Arts Detroit Slideshow Series gathered John E. Collins and Dimitri Hegemann. To discuss the past, present, and future of techno music; and how the movement affected their hometowns.

John and Dimitri were born on two different sides of the world. John being from Detroit and Dimitri from West Germany. John was born and raised in Detroit. He is apart of Underground Resistance. A team and record label of artist from Detroit who invented techno music. John has preformed and sold music across the world.

Dimitri grew up on the west side of the Berlin Wall. He was widely influenced by Woodstock and music that promoted peace. He matured during a time where Detroit Techno music had to be smuggled across the Berlin Wall.

After the wall collapsed Germany's east and west side combined. Using Detroit Techno as glue to bring together a torn country's young people. Dimitri visited Woodstock one year; his biggest takeaway from the hippies was their sense of community. The Detroit Techno inspired him to start his own music populace in the new Germany.

Tresor opened up in a location mutual to the east and west sides of the wall. Tresor gave Berlin the space for young people to be free. John and Underground Resistance would fly out and provide the soundtrack to the organized anarchy. The Detroit Techno sound was real, and relatable to their lifestyles.

Dimitri acquired Tresor on a three month lease. But to this day the building is still standing. It continues to be a bridge to two cultures who probably wouldn't have had another connection otherwise. 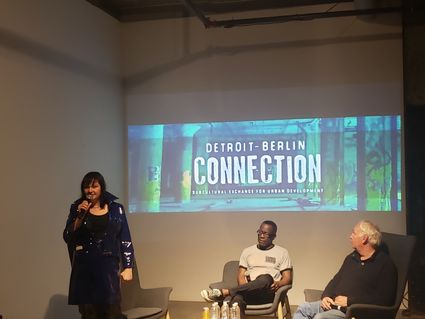 John and Dimitri belong to a group called The Detroit Berlin Connection. DBC is dedicated to bringing together the modern cultures of Detroit and Berlin. Dimitri wants to do for Detroit, what Detroit did for Berlin; help to bring a culture of tourism and nightlife. That would help Detroit stand out amongst the world.

John says the Detroit Berlin Connection is making baby steps towards its goal. A state senator, city officials, and representatives from the police and fire departments were present in the last meeting. He believes everybody will win when the mission is accomplished.

Patience is the only thing Detroiters can rely on while John and Dimitri handle the business. Dimitri is handling his own business with Tresor. John has a show on Redbull radio and does tours at Submerge Record Distribution. Located at 3000 E Grand Blvd, Detroit, MI. Submerge Records is the only techno music museum in the world.