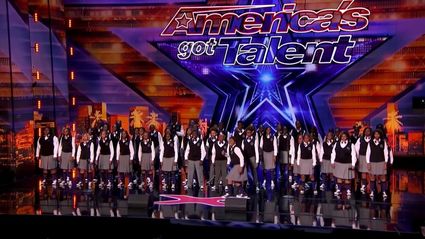 Detroit Youth Choir performs on Americas Got Talent. Makes it to the finals

The Detroit Youth Choir left it all on the stage on Tuesday, September 17. That was their final performance on their journey to be named the 2019 America's Got Talent winners. The 52-member choir performed to the same song that introduced them to the world, 'Can't Hold Us. The young people won the hearts of America and after each of their wins, it looked as if their confidence in themselves and each other grew stronger.

Their choir director Anthony White, beamed with pride after and during each performance. The DYC had stiff competition as there were nine other acts that were vying for the top spot and the winner of $1 Million dollars.

Flint Michigan native and host, Terry Crews, gave them the Golden Buzzer after their first performance. Through watering eyes, he stated how proud of them he was and their presence on the stage represents the dreams of young people throughout Michigan

"You represented all the excellence that is in so many people that are overlooked," said judge Gabrielle Union after their performance. "You guys shine so bright on that stage."

The choir performed in what judge Simon Cowell called "the best final" the show has had in its 14 seasons, facing nine other acts. Other competitors included an air-defying youth dance group from India, V. Unbeatable; a group of synchronized dancers from Ukraine called Light Balance Kids; and comedian Ryan Niemiller

They sung, rapped and danced their way into the hearts of millions.

Gov. Gretchen Whitmer on Tuesday FaceTimed the choir and wore purple in the group's honor. "We're all rooting for these talented kids and I'm so proud of all their hard work," said Whitmer on Twitter.

The group is slated to be the opening act when the 93rd America's Thanksgivng Day Parade hits Woodward Avenue in downtown Detroit on Nov. 28.

The choir also is scheduled to perform on the main stage during the Parade Company's largest fundraiser, the 30th Annual Hob Nobble Gobble, at Ford Field.

n partnership with the city of Detroit and the Downtown Detroit Partnership, WDIV-Local 4 will throw a homecoming celebration for the "America's Got Talent" finalists, Detroit Youth Choir, on Friday at Campus Martius Park in Downtown Detroit.

FREE and open to the public