Water Warriors use their voice for Environmental Justice 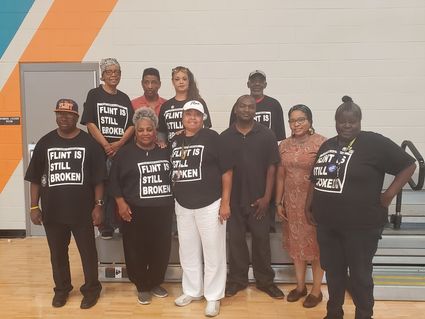 DETROIT - Members of the Democracy Defense League drove down from Flint, Michigan because they say this environmental justice thing is critical. They call themselves the Water Worriers of Flint. They take everything into account; from the PFAS, land, water and air.

They have been in Federal Court fighting for the rights of the people. We have been 'Boots on The Ground' for five years, since day one when the water problem stated in Flint.

Flint is still broken because the infrastructure is not fixed. They live with bottle water on a daily basis.

Claudia Perkins Milton says, "I have at least eight (8) cases of water in my kitchen right now. We are still using bottle water for everything. When my grandkids come over, I boil water and fill the tub up enough to bath them. I boil my dish water and rinse with bottle water.

It was deliberate, how can you not classify it properly... as a disaster.

The Mayor of Flint, Karen Weaver, has been fighting for the residents . But the problem is bigger than her. A lot of revenue has been brought into the city, however there has been people that have been misusing the money. The State has access to the money and it has been used unfairly. For example, there is a new movie theater and other developments in the city. However, the North End, where predominately Black people live looks like Hell. Five years later, there are some homes in that area being demolished. But now there are people with outside interest coming in to buy up the land. Milton says, "She feels it is a system of racial inequality".

We want Medicare for all and we want anyone who has been impacted by the horrific deliberate water disaster should be able to be treated. One of their members were a part of the panel at the Environment Justice Congressional Hearing at Kemeny Center. She brought their concerns to light during the hearing.

Claudia says, "My nephew had the highest lead count in Gennese County. My cousin was the little boy on the cover of the Time magazine, my sister died of cancer and I was full of E Coli. My family has been truly impacted. That is why I stay in the fight."

When asked, what can people outside of Flint do to help resolve the problem, she said, "Come together and target the big corporate interest and hit them in their pocket. Stop doing studies, because we know what the problem is."