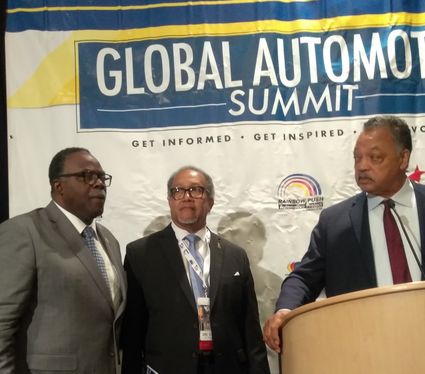 On November 1, Reverend Jesse Jackson spearheaded the 20th Global Automotive Summit at the Motor City Casino conference room in Detroit. This year's theme is entitled, "Expanding the African American Opportunity Pipeline." The theme is inspired by information gained from a review of the Automotive Diversity Scorecard which graphically illustrates the progress (or lack of progress) of inclusion efforts of auto manufacturing in the United States. The categories range from employment, dealership ownership, advertisement and marketing.

"The Automotive Summit was launched 20 years ago to close the economic gap for African American suppliers, dealers and professionals in the auto industry," said Jackson. "It is apparent that in many cases, the industry has responded. But the gains will be lost if the pipeline for African Americans are minimized."

The Summit was an all-day affair and was comprised of workshops, panel discussions, receptions and other events.

Reverend Jackson has been involved in civil and human rights activities since the 1960's when he was a young firebrand preacher and organizer for Dr. Martin Luther King, Jr., who he accompanied on many social and economic justice initiatives until King's assassination in 1968.

Jackson has been described as the Great Unifier and the Conscience of the Nation and has played a vital part in movements for peace, economic rights and social justice, both domestically and internationally.

In 1971, Jackson founded Operation PUSH (People United to Save Humanity) and has utilized it as a vehicle to initiate and to buttress a wide range of social, political, and economic justice movements. In 1984 and 1988 he was the first Black American candidate to run viable and competitive campaigns for the presidency of the United States.(His 1988 campaign registered over two million new voters and ushered in over seven million votes).

Not limited to national politics, in 1984 Jackson secured the release of a captured American navy pilot in Syria. In 1990 he successfullynegotiated the release of hostages held in Iraq by sitting down and talking to Sadaam Hussein. And in 2000, Jackson helped win the release of journalists held captive in Liberia.

In recent years Jackson is still highly regarded for his social justice advocacy as well as his personal and organizational efforts to gain concessions from corporations and other entities and to improve working conditions and gain equity in hiring, wages and contracts for Blacks and minorities.

Since Black Americans spend billions of dollars annually into the automotive industry, it is not surprising that Jackson has been at the forefront of the fight tosecure inclusion and diversity in theindustry for over 20 years.

"We have accomplished so much together during the last two decades," said John A. Graves, Chairman of Rainbow PUSH Automotive Project. "Yet much unfinished work remains in the auto industry. African American auto suppliers have dwindled by more than 50% over the last 10 years."

According to the Rainbow PUSH 2019 Automotive Diversity Scorecard, auto manufacturers Ford and Toyota have the best grades in the six categories of employment, advertisement, marketing, procurement, dealers, and philanthropy.General Motors, FCA/Chrysler, Nissan and Honda follow next for meeting these standards. And Subaru, Mercedes, Hyundai, BMW, Kia, and Volkswagen register last on the list. 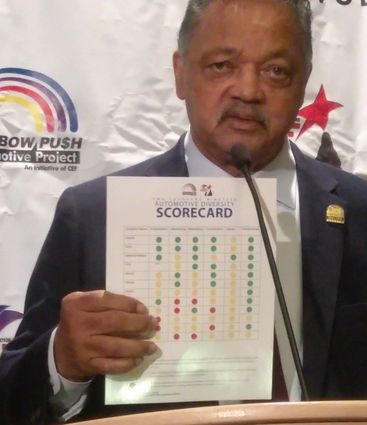 In a 10:AM press conference held at the summit, Jackson lamented that out of approximately 11,000 auto dealerships in America, less than 300 are African American owned. "We cannot allow the dreams of capable African American businesses and professionals to be deferred," Jackson said. "Although America is soaking in a whirlwind of mendacity, the auto industry must reject this notion and make an honest assessment of how to fill its pipelines with opportunities for all. In doing so, we make the nation better; we make the auto industry better."