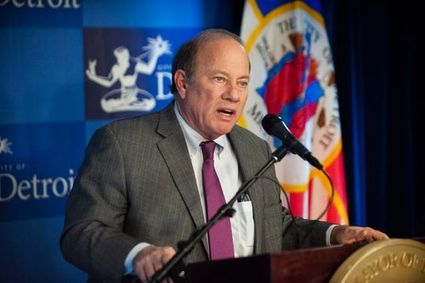 Mayor Mike Duggan is soliciting political and community support to place a $250 million-dollar municipal bond proposal on the ballot in March 2020.Yet, a recent report released by Detroit Auditor General Mark Lockridge, is only the latest in a series of negative revelations and allegations that has haunted Duggan and his administration.

The Auditor General revealed that Duggan's controversial demolition program contained data that is "inconsistent and unreliable" and that record keeping was shoddy and laden with obstructions.

In a scathing rebuke Lockridge reported that "a perception that public officials are using the procurement system to reward themselves, their friends or supporters, poisons the public's confidence in government and shakes its faith in the bureaucratic process." [1]

Since its inception, Duggan's demolition (demo) program has been riddled with allegations of cronyism, incompetence, and fraud. And recently congresswoman, Brenda Lawrence called for an examination of the dirt used to fill holes at over 14,000 demo sites. This was prompted by earlier reports of contaminated dirt possibly used [2] as well as by the searing two year audit that Lockridge's office provided. "There was almost a one-year delay in receiving information for our first audit," stated Lockridge. "During these periods, we found it necessary to twice subpoena one of the entities for the requested documents and reports that should be available for demolition related activities." [3]

Detroit councilwoman pro tem, Mary Sheffield is asking for a congressional hearing to examine allegations of malfeasance in Duggan's demo initiatives. Her inquiry was prompted by a Detroit Free Press article that described a probe by the feds to uncover environmental hazards in the beleaguered demo program. [4]

"There is a difference between neglect and blatant disregard for rules and safety of the residents of the city of Detroit," said Sheffield. "I am committed to do my part to ensure that Detroiters are protected, and neighborhoods are not negatively impacted by demolition." [5]

On November 5, Detroit residents attended the city council meeting at CAYMC to voice their concerns. Most of the public comments were in opposition to the issuance of the proposed demo bond. Kenneth Holloway voiced his displeasure and suspicions about foul smelling fumes coming from the construction of the FCA/ Chrysler plant near his home on Detroit's eastside. These sentiments were reinforced by a damning report by Detroit's Inspector General concerning improper and possibly unlawful actions by Duggan's chief of staff, Alexis Wiley, who ordered government generated emails related to the mayor's infamous "Make Your Date" program deleted. This led to an investigation by the Michigan Attorney General's office, which could result in criminal charges being filed. [6]

Another sticking point with Duggan's new bond proposal is the Auditor General's report that a total of $532 million dollars were spent on the demolition effort since 2014. And out of 532 million, a whopping 202 million dollars went to soft, administration costs. Also, according to the report, the average cost of a demolished house was an astronomical 28 thousand dollars when administrative costs were added. [7]

"Good community life means, essentially, life that supports families with adequate housing and community facilities, with sufficient economic opportunity for households to live comfortably and prosper in an environment safe from crime, pollution, and other dangers," writes June Manning Thomas, Professor of Urban and Regional Planning at the University of Michigan. "Planning must depend upon social justice, defined as fair and deliberate treatment of all parties but with particular concern for improving the lives of the disadvantaged." [8]

A recurrent complaint of Duggan's demo program is its lack of transparency and its inability or unwillingness to involve community members in the vision, planning, feasibility, and goals of the project. Thus, from early in the demo initiative, there were disturbing reports of no-bid contracts to pre-selected, White owned companies. And a belief that the great majority of Detroiters, who are African American and poverty stricken, were left out and sacrificed at the alter of corporate greed and White privilege. [9] Thus the costs of Duggan's Demo program have increased drastically, and there is little confidence among many Detroiters that costs under another public funded initiative will not skyrocket again.

Many Detroiters are concerned that Duggan seems more focused on tearing down houses than keeping low income Detroiters in housing, which is forcing them to move out of the city.

"I want to speak to the Black folks in this room," said Detroit resident, Ramone Jackson, at a Charter mandated district 3 community meeting on November 14th. "Do you know what gentrification means for Black people? Gentrification means the destruction of our voting power. Anytime you take a Black population and you split us up and you spread us thin, we lose political power. This is happening in Detroit, and the person responsible for it is the man who occupies the office of the mayor. Gentrification cannot happen in this city without the assistance of the mayor."

Yet, despite the negative reports and sentiments, Duggan and his administrative officials seem optimistic about their prospects and the progress of the demo initiative that another large infusion of public dollars could bring. "We've done this 19,000 times and we've learned a lot," said David Masaron, Chief Financial Officer for the city of Detroit.