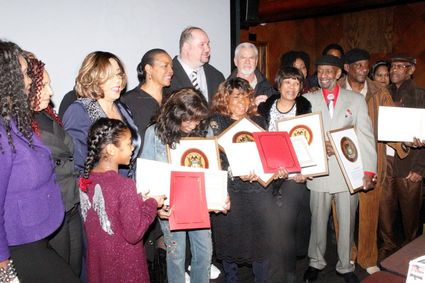 Original members of the Marvelettes, the Vandellas, Carolyn Crawford, and Joe Billinslea of the Contours received honors in Hamtramck late last month.

In honor of Motown's 60th Anniversary, State Representative Isaac Robinson hosted five legendary Motown artists to receive special honors on Monday, December 30 at The Film Lab Cinema and Cocktail Lounge in Hamtramck. Receiving honors were Hamtramck native and original member of the Contours Joe Billingslea, Jr., original member of the Marvelettes Katherine Anderson Schaffer, original members of the Vandellas Annette Beard and Rosalind Ashford, and Carolyn Crawford, who signed with Motown when she was 13.

Ware commented that the historic aspect of the day's honors were especially significant. "I think it's a wonderful event today," she said. "I think some of the entertainers that are present, they feel and know that they were not forgotten."

"Motown is part of the fabric of Detroit, Hamtramck and Highland Park," said Robinson. "These groups are still touring...these are real-life heroes, right from our neighborhoods."

Anderson Shaffer of the Marvelettes said the honors were a pleasant surprise for her. "I'm overwhelmed with it all," she said. "I loved everything that I got and I love the people that gave it to me." The Marvelettes are best remembered for their hit song, "Please Mr. Postman."

"I was really, really glad to be honored," said Billingslea, adding that honors from his hometown were the most meaningful. "All this is because of Motown, I'm glad everyone came to help celebrate the 60th year, and I'm glad to be here." Also attending the day's event were Odell Jones and Gary Grier, both of the Contours, saying they were pleased to see Billingslea receive recognition. The group is best known for its chart-topping hit, "Do You Love Me," which became a hit again in 1988 thanks to the hit film, "Dirty Dancing," starring Patrick Swayze and Jennifer Grey. 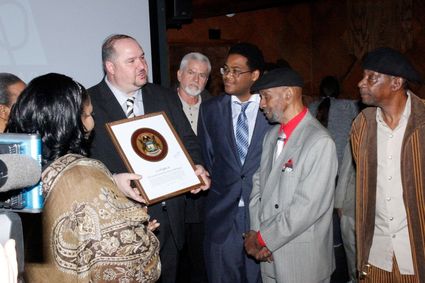 State Representative Isaac Robinson presents Joe Billinslea of The Contours with the Great Seal of MIchigan.

Crawford, who is part of the Motown A Go Go events, said, "It was a good celebration for all of us, I'm very happy to receive the achievements that they gave us today." Crawford continues to have a large following of fans in Europe and will be touring in the United Kingdom and Spain later in the year.

"As a Detroiter who represents Detroit and Hamtramck, the coolest part of my job, is I get to honor Motown legends," added Robinson. "It's an honor to honor five original artists of Motown in its 60th year."