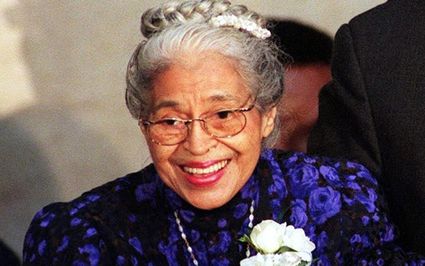 When, on a December evening in 1955, Rosa Parks refused to give up her seat to a White man on a segregated bus in Montgomery Alabama, she was arrested and besieged by threats from angry White racists and her courage sparked the resurgence of America's civil rights movement. Yet her commitment to respect, human rights and human dignity began long before that fateful day.

Born Rosa Louise McCauley in Tuskegee Alabama on February 4, 1913, she displayed character traits of shyness and kindness, along with fierce pride and a determination to fight injustice at an early age. She, as a young woman, met her future husband Raymond Parks, a young activist with whom she found a kindred spirit, and she became deeply involved in civil rights strategies and activities.

In fact, over a decade before she was enmeshed in the bus incident, Parks was an official and active member of the Montgomery NAACP where she was at the forefront of voter registration drives and racist laws, customs, and policies in the South. Parks often traveled throughout Alabama to document cases of Black persecution. In an infamous incident, she sojourned one hundred miles to Abbeville Alabama to assist Recy Taylor, a young Black woman who was set upon by a car full of White men in 1944 and sexually assaulted. This was extremely dangerous work to be involved in and Parks showed great courage in doing so.

"Traveling throughout the state, Rosa Parks sought to document instances of White-on-Black brutality in hopes of pursuing legal justice," writes professor Jeanne Theoharis in her revealing book, The Rebellious Life of Mrs. Rosa Parks. "This work was tiring and at times demoralizing because most of the cases Parks documented went nowhere." Yet Parks continued to challenge, and resist racism and injustice and she never refrained from this mission.

Years later when she left Alabama and moved North to the booming industrial city of Detroit, Parks always carried with her the responsibility as an individual to fight against ignorance and injustice and, as she said in an interview, "to discontinue all forms of oppression against all those who are weak and oppressed."

Parks lived in several locations in Detroit, perhaps the first was a small two-story wood frame house on Deacon Street located less than a block east of Visger Road in southwest Detroit. The house was home to Parks' younger brother, Sylvester McCauley, and Parks lived there with him and his wife and children for a time. She struggled financially in her initial years in her adopted city and reportedly worked in the basement of the small house tailoring clothes to earn sustenance. Neline Baldwin, now 87 and a former neighbor, has fond memories of Parks. "She was very kind, and she was a quiet type person," said Baldwin. "She spoke very softly. She would come over and we'd chitchat. I was interested in sewing, so she taught me how to lay out my pattern."

In 2016 the Deacon Street house was dismantled and shipped to Germany where it was restored and is estimated to bring an auction price of several million dollars.

Rosa and her husband also rented for a few years an apartment on Euclid street on Detroit's west side, yet housing discrimination drove up prices for decent housing for Blacks and she was forced to move to the Progressive Civic League meeting hall, which was a civic organization largely made up of Black professionals. Rosa served as the treasurer/manager of the group and her husband was employed as the caretaker.

In 1961, the Parkes's left there lodging at the PCL building and moved to the ground floor of a two family flat located at 3201 Virginia Park. It would remain her home for the next 40 years. Sadly, it was in this house where she was beaten and robbed by a Black drug addict in 1994. Parks forgave him and commented that the incident was a sign that we as a people had a long way to go.

Parks continued her work to empower marginalized people during her years in Detroit and she discovered many of the same racial injustices and inequalities in Detroit that had plagued Blacks in Alabama. 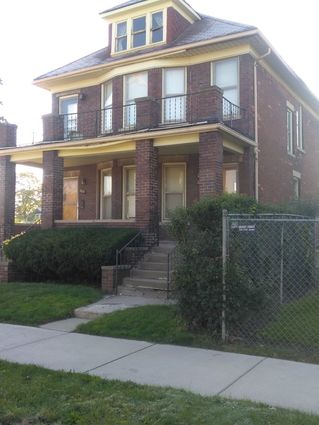 "I don't know if I could have been more effective as a worker for freedom in the South than I am here in Detroit." Said Parks. "Really the same thing that has occurred in the South is existing here to a certain degree. We have the same problems."

And whether as a staff member for Congressman John Conyers, or a political activist working tirelessly to empower the dispossessed, or as a community worker and church goer and concerned friend and neighbor dedicated to calling out and struggling against bigotry and injustice, she continued to fight the good fight in mind, body and spirit till the day she died.