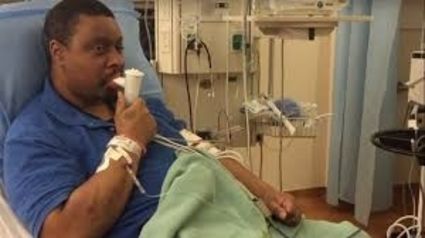 Hospitalization adds to the national cost of asthma each year.

Chances are very likely that you know someone with asthma. The Centers for Disease Control and Prevention (CDC) states that more than 25 million Americans-or 1 in 13-- struggle to manage the chronic disease. African Americans in the United States die from asthma at a higher rate than people of other races or ethnicities.

For those residing in or near southwest Detroit, respiratory ailments are no stranger. Environment is the culprit. In 2016, Newsweek Magazine declared on its cover "Detroit Makes You Sick," and featured a story which introduced the nation to the reality most residents here already know: there are 52 heavy industrial sites within a three-mile radius spewing out an unknown number of airborne pollutants on the surrounding community. Research suggests that there is a link between exposure to air pollution and asthma.

Common symptoms of asthma include shortness of breath, chest pain or tightness, chronic coughing, and trouble sleeping due to coughing or wheezing.

"People are fighting to breathe every single day," says Elizabeth Milton, a registered nurse and certified asthma educator. Milton works with Better Life Learning, a for-profit organization that helps people with chronic disease management. The organization serves the tri-county area providing in-home visits, but Milton says nearly 80 percent of their patients are in Detroit alone. Industry aside, the city's busy interstate highways means vehicles are spitting out emissions which aggravate asthma and other respiratory ailments. The rate of emergency room visits in Detroit is nearly twice that of the rest of the state, according to a recent Detroit Community Health Assessment.

The disease can be a costly one. The Asthma and Allergy Foundation of America cites that from 2008 to 2013, the annual economic cost of asthma was more than $81 billion, including loss of work and school days.

There is no known cure, only management. Management of asthma ought to be done in conjunction with a healthcare professional. Prescribed medications must be taken as directed. People with asthma are at higher risk of developing complications from respiratory ailments such as colds, flu, and pneumonia, making vaccinations especially important.

Flare ups or asthma attacks are frequently caused by triggers, or allergens such as mold, dust, or pet dander. Knowing your triggers and avoiding them can help in asthma management. But what if the trigger is the air outside your front door? 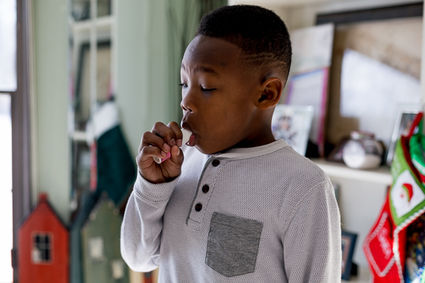 Raye Townsel taking Asmanex to prevent having an asthma attack

Milton also has a bachelor's degree in Environmental Policy and is fully aware of the connection between the pollution levels in southwest Detroit and chronic health conditions she sees in the residents. "I think that there is a pattern of environmental injustice and a pattern of asthma rates, asthma mortality...that increase as those injustices are persistent in those communities," she says. "No one has really done a study on how all of those industries play a role in the health inequities that exist in that community." She says residents may be doing all they can to keep healthy, but the environment smothers their efforts. She adds that doctors and hospitals can provide treatment for patients in distress, but are unaware of the environmental impact outside of their home.

Milton encourages residents living in the shadows of southwest Detroit's industrial region to get involved in community meetings and permit hearings. She says residents need to fight for their health. "If we choose to work, play, live, worship in the communities that we choose to live in, we still should have the right to breathe better air.